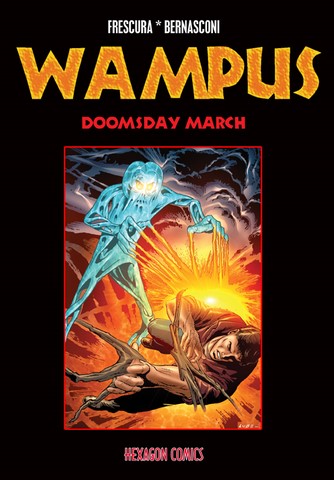 by Franco Frescura; art and cover by Luciano Bernasconi.

Wampus was the herald of a second generation of comic heroes and magazines launched by Editions Lug in 1969, which eventually led to Jaleb, Homicron, the Time Brigade, Kabur, Jeff Sullivan and many more.


Wampus is a shape-shifting monster sent to Earth by an evil cosmic power called The Great Mind to sow havoc and destruction. He can change into any form by merely touching water, and revert to type by coming into contact with fire. His only adversary seems to be an French ex-secret agent named Jean Sten, whom, in typical Invaders tradition, no one believes.


In this issue, Wampus brings chaos to London, Spain and Venice, while Sten appears unable to stop him. Yet, strange new allies show up who might pose a challenge to the creature from beyond…