In 1950, writer/editor Marcel Navarro decided to try his luck at publishing and teamed up with Auguste Vistel to create Editions Lug, which were based in Lyon, hence the name (Lyon was called Lugdunum by the Romans).

At first, Lug published the traditional mix of French and Italian reprints, but unlike the competition, Navarro decided to create new characters, which he then entrusted to French and Italian studios to script and draw. The universe created by Navarro remains to date the first and foremost shared universe in French Comics.

Lug's most famous hero was a Tarzan "clone" called Zembla. The Zembla comics magazine was created in 1963 for artist Franco Oneta, primarily to compete with the Italian Akim, an Italian Tarzanic type published with much success in France by competing publisher Aventures & Voyage. Zembla quickly became one of Lug's most popular titles. Zembla was a dark-haired Ka-Zar, and his Savage Land-like kingdom often brought him into contact with mad scientists, world conquerors, lost civilizations, wizards, and aliens. The original series ran without interruptions until the 1980s, when, as we shall see below, the entire Lug output was switched to reprints only. Zembla returned in 2000 in a series of new adventures.

In 1969, Claude Vistel, Auguste Vistel's daughter, returned from a trip to New York and convinced Navarro to publish the first translations of Marvel Comics in France, in a magazine entitled Fantask, which featured the Fantastic Four, Spider-Man, and Silver Surfer. Sensing that he was on to something, Navarro followed suit with his own creations.

Wampus was created in 1969 by Franco Frescura and Luciano Bernasconi. This series, launched in its own magazine, featured a fearsome-looking, shape-shifting alien monster sent by an evil cosmic intelligence to destroy Earth. The back-up feature was Mister Song, the adventures of a S.H.I.E.L.D.-like organization called C.L.A.S.H., also by Frescura, with Giorgio Trevisan. Unfortunately, Lug had run-ins with the censors, and both Fantask and Wampus were cancelled after only six issues.

The following year, Navarro re-launched the Marvel characters, first in a magazine called Strange, then in Marvel (which also fell victim to censorship a year later), then in Nova, Spidey, etc. At the same time, he continued to introduce more new French heroes, relying mostly on the talents of a hand-picked crew of French and Italian talent, such as writer Claude J. Legrand and artist Luciano Bernasconi. In 1972, in what might well be called "The Lug Universe: Phase Two," Navarro launched the magazine Futura, which published the following heroes:
- Jaleb the Telepath, an alien mind-reader who grew up on Earth and now searches for his origins, by Legrand and Annibale Casabianca;
- Homicron, a Captain Atom-like alien stranded on Earth, drawn by Lina Buffolente;
- The Time Brigade, a time patrol from the 40th century, by Legrand and Edmond Ripoll;
- Jeff Sullivan, the Man of Brass, a man with the power to control his own density, by Legrand and Bernasconi;
- Larry Cannon, an insurance investigator who fought alien parasites that had the power to control human minds, by Legrand and Annibale Casabianca.
- The Other, a less monstrous, more humanoid version of Wampus (with the same unique eye design), involved in tales of less nihilistic violence, by Frescura and Bernasconi;
- Sibilla, a Madame Xanadu-like heroin and occult investigator, by Pier Carpi and Bernasconi.

In 1974, Navarro launched a new magazine named after its Kamandi-like star, Waki, whose exploits were created by Frescura and Bernasconi. In 1975, he launched another magazine, Kabur, featuring a Conan-like adventurer of that name, backed up by stories of a New York-based super-hero, The Bronze Gladiator (a Hawkman-like character); both features were produced by Legrand and Bernasconi.

In 1980, in what could be dubbed a virtual "Lug Universe: Phase Three," Navarro re-launched the magazine Mustang, formerly a western-themed publication, with several super-hero series, including Ozark, by Jacques Lennoz and Franco Oneta, the Native American sorcerer supreme of that new universe. During that time, other super-heroes were inserted in the contents of the various other magazines published by Lug, including:
- Phenix was a black-clad, bike-riding Huntress-like heroin who fought crime in Chicago (drawn by Bernasconi);
- Starlock was another powerful Hulk-like alien stranded on Earth (drawn by Bernasconi);
- Kit Kappa was a Master of Kung Fu trained in a Tibetan Shangri-La (drawn by Bernasconi);
- Count Saint-Germain was the notorious immortal alchemist, now turned supernatural avenger (drawn by Bernasconi);
- Bob Lance was the modern-day descendent of the Round Table hero (drawn by-- whose else?-- Bernasconi);
- Jaydee was a teenager with the power to turn into animals (like DC's Changeling) (drawn by Danilo Grossi);
- Motoman was a super-biker high school student (drawn by Franco Oneta);
- Qube was a young boy in possession of an alien medallion à la Green Lantern's ring (drawn by Franco Oneta);
- Mozam was an African, more hard-edged Tarzan;
- Lucifer was an angel exiled on Earth who had to perform good deeds (drawn by Raffaelle Paparella).

Marcel Navarro had masterminded the creation of an entire fictional universe entirely unlike any other in French comics, in terms of scope, diversity, and number of characters--one that resembled the less cohesive DC line of the period, as opposed to more coherent Marvel set-up. Since Lug licensed many of its comics from Spain and Italy, conversely its own series were also licensed by Italian and Spanish publishers, and printed with great success in these two countries.

However, during the mid-1980s, Auguste Vistel passed away, and Navarro eventually chose to retire. Lug was sold to the Scandinavian publishing group Semic in 1993. At that time, the commissioning of new French stories was discontinued, and the titles became reprints only, or foreign licenses. Lug was fully merged into the Semic group in 1994.

During the 1990s, the Semic Group sold a controlling interest in the company that had formerly been Editions Lug back to its French partners, Tournon. The business became autonomous again, operating under the name of Semic S.A. In 2000, under the impulsion of its new editor-in-chief, Thierry Mornet, Semic decided to create new stories and revamp its old characters.

This program took the form of a line of six digest-sized comics: Kiwi, Mustang, Rodeo, Special-Rodeo, Yuma, and Special-Zembla, as well as limited series such as Fantask and Strangers, which published a mix of old reprints, new Italian stories (such as Tex or Martin Mystere), and new French creations. Under the aegis of writer-editor Jean-Marc Lofficier, the French newstands witnessed the return of Zembla, Wampus, Kabur, Phenix, The Bronze Gladiator, The Time Brigade, Sibilla, and numerous other classic characters.

Some series have been drawn by talented French newcomers, such as Jean-Jacques Dzialowski on Homicron (Dzialowski has recently drawn Thunderbolts for Marvel and Detective Comics for DC), Chris Malgrain on The Bronze Gladiator, Stéphane Roux on Sibilla, J.-M. Arden on Dick Demon, or the Peru Brothers on Drago. Others enlisted once again the talents of their original artists, such as Luciano Bernasconi on Wampus and Franco Oneta on Zembla. Finally, artists from all over the world have contributed to the new line: from Mexico (Juan Roncagliolo Berger on Phenix, Alfredo Macall on Dragut, Manuel Martin Peniche on Kabur), from Spain (Mike Ratera on Kabur, Mariano De La Torre on Starlock, Manuel Garcia, Javier Pina, and Fernando Blanco on Strangers, a new superteam), from Brazil (Marcelo Di Chiara on Kit Kappa), etc. These stories have attracted new teenage readers, as well as older, nostalgic ones who are eager to rediscover favorite characters of their youth.

Strangers--a group comprised of a new Homicron, Starlock, Jaleb, Jayde, Tanka, plus a new character, Futura (in homage to the old magazine)--was published in the U.S. by Image Comics, making it the first French super-hero comics ever published in the United States! In 2004, Phenix and Sibilla teamed up with Witchblade in Blood Oath, a book published by Top Cow.

After Semic went out of business in 2004, the creators and authors banded together undser the management of Jean-Marc Lofficier as HEXAGON COMICS to continue exploiting their creations. First, they entered into a publishing agreement with Black Coat Press which released eight volumes of English-translations of some of the most popular series: Zembla, Kabur, Phenix, Wampus, etc.

In 2008, they arranged for the French reprint of Kabur and Dragut in 14 large-size hardcovers, before contrtacting with Black Coat Press' French division, Riviere Blanche, to release a series of 500+-pages trade paperbacks reprinting the entire catalog of the Hexagon Series. To date, over 90 volumes have been published out of an estimated 150 in the collection!

In 2010, Hexagon Comics entered into yet another publishing agreement with Wanga Comics to restart Strangers as a bimonthly comic-book, and publish a companion comic featuring other characters of the Hexagon Universe entitled Strangers Universe. In 2013 this program was taken over by Riviere Blanche. New stories are being produced for both titles, as well as for a third series featuring the Guardian of the Republic.

Also in 2011, Rivere Blanche began publishing novelizations of new stories taking place in the Hexagon Universe, a testimony to the characters' long-lasting appeal.

READ ALL ABOUT HEXAGON COMICS IN BACK ISSUES MAGAZINE (PDF). 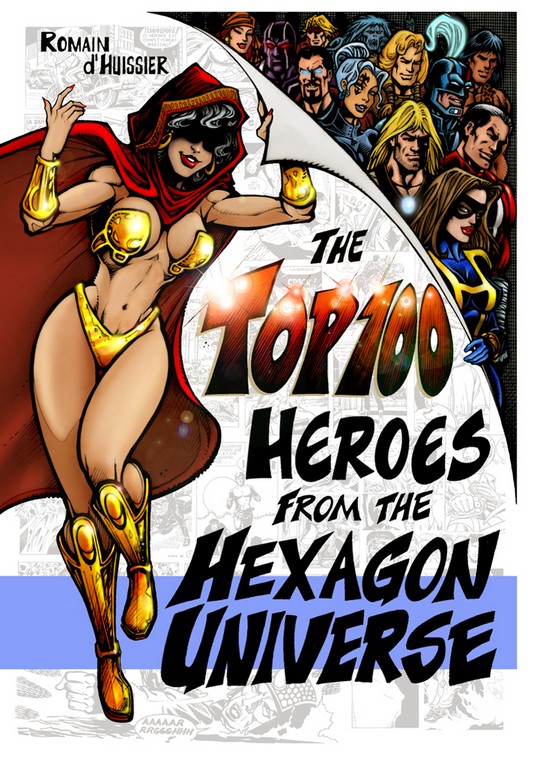 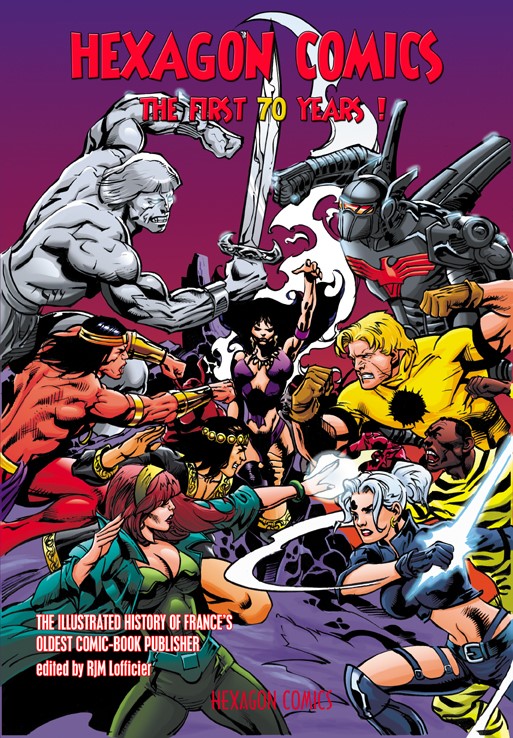 These two books are on sale in our shop!