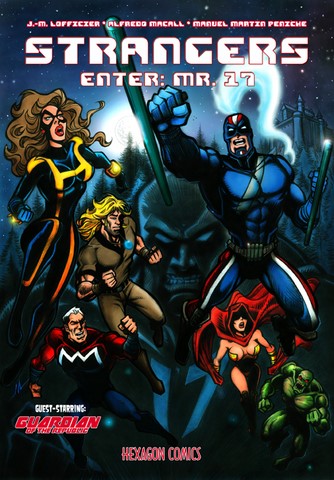 HOMICRON is a NASA scientist whose body is inhabited by a mysterious alien from planet Alpha. STARCYB is a servant of the Towers, supremely powerful cosmic entities. FUTURA is a mysterious woman from a parallel dimension. JALEB is the secretive agent of a Galactic Federation of telepaths. JAYDEE is a teenage, alien metamorph, abandoned on Earth as a baby, and who may well be the deadliest killing machine in the universe... These characters, all “strangers” to Earth, are brought together by TANKA, a former jungle lord who has been recruited by entities from our planet’s farthest future to be their “time agent” and is now empowered to protect our world from extra-terrestrial menaces.

In this tenth volume of Strangers, the heroes clash with the renegade Salamandrite Mr. 17 to prevent the return of the Wan Lords... Special guest-stars: Guardian of the Republic! Morgane! Scarlet Lips!